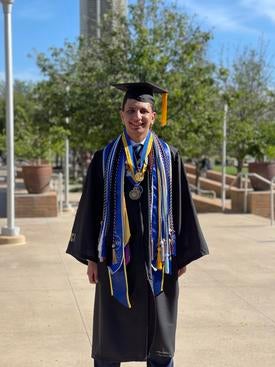 Describe the research you participated in as an undergraduate.

I conducted a comparative research project on how the living standards in both South Africa and Nigeria can help explain the differences in their public health policies, where I looked at and compared both nations’ infant mortality rates, education level, Gross Domestic Product (GDP), among other measurements of well-being to have a good idea of how well off each nation is compared to the other. This was purposefully done knowing that South Africa excelled at all these measurements of well-being compared to Nigeria so that I would be able to provide an effective comparative analysis between both countries as part of my research. Therefore, my goal for this research was to simply provide recommendations to Nigeria’s government on how they can improve the living standards of Nigerians from a policymaking aspect by relying on what policies South Africa was able to enact over the years to improve their citizens’ living standards. Furthermore, I organized and hosted my own webinar series as part of the field work for my own research, where I prioritized bringing in public health professionals from developing nations such as from Nigeria and South Africa in an effort to promote health literacy among the general public and raise awareness of the public health issues affecting underserved communities today. My research was conducted over the course of two academic years under the guidance of Dr. Kelechi Kalu from the Department of Political Science.

What campus activities did you participate with?

What are the major highlights of your academic career?

Case Study: There were two case studies that I conducted this year. The first case study was about the academic and inclusivity experiences of students at UCR as well as what changes students hope to see at the administrative level to address those experiences. The second case study was about the experiences of students with group chat services, how they benefit from them, and understanding whether they should be kept come this Fall. The second case study also looked at the impact that cheating has on students using and how that should be addressed through their perspective as students.

The goal of the case studies was to advocate for the student body at UCR by providing them with the platform to express their thoughts and opinions on topics that relate to their experiences as students as well as by working with faculty and administrators to bring about consequential changes by providing them with recommendations from a student’s perspective on how to improve student life on campus and initiating constructive dialogue.

What inspired you to create the webinar series and the case studies?

Growing up in an underserved community myself in my native country of Egypt exposed me to the disparities in healthcare services experienced by community members across socioeconomic lines. In fact, one of the reasons those disparities exist was there was not an avenue for which public health information can be disseminated. Because of that, I became inspired to serve as an advocate on public health issues by creating the webinar series to help make such information more accessible to the general public. As part of the Millennium Campus Network specifically, I made the webinar series my social impact project designed to satisfy the third and fourth UN Sustainable Development Goals of Good Health and Well-being as well as Quality Education. From there, my desire to serve as an advocate with a goal in mind extended to the case studies themselves since they allowed me to advocate on behalf of the student body at UC Riverside and to be engaged with the campus community.

What are the results of the case studies?

For the first case study, students expressed that the UC Riverside campus was overall inclusive and that they had positive relationships with their instructors and teaching assistants, which ultimately contributed to their overall success at UC Riverside. Some of the changes students hoped to see included having more academically-inclined clubs advised by faculty members targeting women and underrepresented groups be established on campus as well as that feedback provided on iEvals by students is acted on right away, among other changes.

For the second case study, students expressed that they benefited from using group chat services, where they cited their ability to connect with classmates in a remote learning environment and to give and receive help much more easily as the main benefits. In regards to cheating, students believed that familial pressures, the desire to maintain a high GPA, and a lack of time to prepare as the main reasons for why they cheat. With that, there was an emphasis on encouraging tutoring at the ARC as an alternative method to direct counseling to combat cheating by students.

What are you hoping to accomplish for both projects?

For my webinar series, I hope that those who attend the webinars get to take in the information they learn from the webinars and apply them in their lives. Whether it be seeking telemedicine services or properly financing their own healthcare payments, I hope that I am able to create a positive impact on the lives of community members as much as I wanted to growing up.

For the case studies, I hoped that I was able to provide faculty, staff, and administrators with a greater awareness of the experiences of students at UCR. Not only that, but I hope that faculty, staff, and administrators are able to play more of an active role in impacting student life on campus. I hope to do so on my part by having them look over future case study questions in advance as part of a commission I am looking to establish this summer dedicated solely to conducting case studies so that the work from this academic year can continue into the future.

What are your plans after college?

After graduation, I look forward to working at the California Air Resources Board as a Loveridge Fellow over the summer. Specifically, I will be working with their Wildfire Project Assistance team under their Research Division. As part of the Wildfire Project Assistance team, I will be tasked with corresponding with the various air districts throughout the state of California to gather information on both their wildfire emergency plans and risks to wildfire exposure in an effort to determine which districts would benefit most from future state funding. From there, I look forward to studying for the LSAT so that I can enroll into a joint JD/MPH program to become a medical malpractice lawyer and a public health reform advocate.