Renata Kootz (Physics) and Nicholas Pham (Chemical Engineering/Physics) have won one of the oldest and most prestigious scholarships in the country, .

The Barry Goldwater Scholarship program, focused on natural sciences, engineering and mathematics, seeks to identify and support college sophomores and juniors who show exceptional promise of becoming the country's next generation of research leaders in these fields. This year, 1280 students applied from 455 institutions. The foundation named only 211 new Goldwater Scholars, and two CNAS students were among the winners. 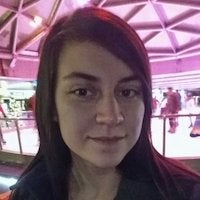 Renata was encouraged to apply for the scholarship after finding it was a good fit for her career goals. Her research paper titled “The Missing Satellite Problem” explained how simulations on cosmological scales would over-predict the number of dark matter halos that host galaxies while observations indicate that there are fewer galaxies on certain mass scales. Renata’s proposal was to implement “observations from the upcoming all sky survey CatWISE,” and focused on bringing observations to simulations to see if this problem was an issue between lack of observational data or and issue of our current models.

Renata has been working under Dr. Peter Eisenhardt at the Jet Propulsion Laboratory (JPL) to find and catalogue distant galaxy clusters, as well as analyzing Self-interacting Dark Matter simulations with Dr. Hai-Bo Yu. She is currently a 4th year (upcoming 5th year), and she hopes her accomplishments can inspire those who have to be in school a bit longer than others. She stated that "this award gave me a very clear idea of where my career can go in Physics. It's very hard to think in the more distant future as in five to ten years, but being able to write down 'I want to become a professor' fueled my ambition and hope." 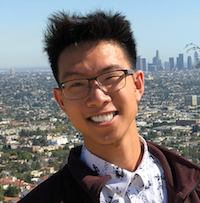 Taken from his proposal:
“While quasar absorption lines are a powerful probe of the IGM, their main limitation is that they provide only a one-dimensional probe of an inherently multi-dimensional structure. To go beyond absorption features, we can use the fact the IGM not only absorbs ultraviolet photons from quasars and galaxies, it re-emits them in the form of a faint Lyα glow. The goal of this project is to determine how best to use this emission to create the first two-dimensional map of the IGM.”

According to Pham: “Obtaining the Goldwater Scholarship serves as validation of my success as a research scholar. The greatest accomplishment is serving as a role model for UC Riverside students to look up to. Winning the Goldwater is a big deal, and snagging this award for UCR motivates others to follow my path."

Nicholas is currently applying to graduate programs and plans to get a PhD in Engineering or Applied Physics so he can be a professor at a university.

This is the second time that two scholars were selected from UCR in the same year, bringing the total amount of Goldwater scholars from UCR since 2013 to eight.