On October 22, campus hosted its fall open house—Discover UCR—for first-year and transfer students interested in applying to and attending UC Riverside. During Discover UCR, students and families connected with student success resources and campus organizations. They also had the opportunity to meet with professors, advisors, and current students from various UCR colleges.

The CNAS Science Ambassadors held numerous tours throughout the morning. Stops on the CNAS tour included many of the science buildings: Pierce Hall, Science Laboratories, Genomics, Orbach Science Library, and more. Prospective applicants had the opportunity to look at amazing artifacts that were collected by UCR scientists in the halls of Geology, including a display of a restructured Mastodon. In Spieth Hall, the second floor contains taxidermy collections of stuffed woodland animals. Each display has different organisms and species that were collected from the UCR Natural Reserves.

While on the tour, students were paired with Science Ambassadors that had the same majors that they were interested in. This helped prospective students understand the classes and experiences they will have if they attend UCR. Science Ambassadors also discussed paid research programs that UCR offers to undergraduates including RISE (Research in Science and Engineering) and Dynamic Genome Scholars Summer Research, which is specifically offered to first-year students who have taken Dynamic Genome (BIOL 20) and want to conduct original research on plants, including citrus. Attendees also learned about the different resources that are available for students to be successful, including the Health Profession Advising Center (HPAC) for pre-medical students and the Academic Resource Center (ARC). 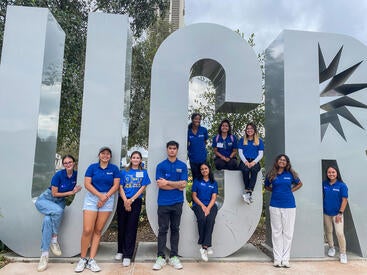 “Leading up to Saturday, there was so much preparation and planning that took place and I am so happy to say that all the hard work paid off,” shared Jennalyn. “I am really proud of all the Science Ambassadors for being on top of things and doing such an amazing job throughout the event by being knowledgeable, kind, and passionate about CNAS and sharing that with all of the guests. There were many smiles, laughs, and words of praise from students and their families. I am glad that we were able to share our love for UCR, and hopefully we convinced many to apply to our school,” said Jennalyn.

“My tour partner, Jared, and I had an absolute blast guiding prospective first-year and transfer students around our beautiful campus,” Kevin shared fondly. “My favorite tour moment happened in the Geology building, where we stopped to appreciate the complexity of the reconstructed Mastodon and learned about the compelling history of its construction since the 1970s from a Geology professor who spoke with tour groups about the exhibits, the Geology department, and UCR as a whole.

“Students were also enthralled by Jared's thorough explanation of the interdisciplinary nature of research at UCR. For example, one of UCR's many esteemed professors determined why plants are certain colors through the use of lasers, and extrapolated how certain plants would be red on planets with a different star than Earth's,” shared Kevin. “Toward the end of our tours, students were in awe of Spieth Hall's taxidermy collection and its wide assortment of mammals and reptiles from the various UCR National Reserves. It was an unforgettable experience, especially since I took Jared on his first tour of UCR when he was a prospective student last year—he even submitted his SIR that same day! I am confident that students on my Discover UCR tour groups feel the same way that Jared did last year—excited to potentially be a part of CNAS and UCR!"

This is only the beginning for many prospective students’ journeys at UCR and the Science Ambassadors were honored to be a part of it!