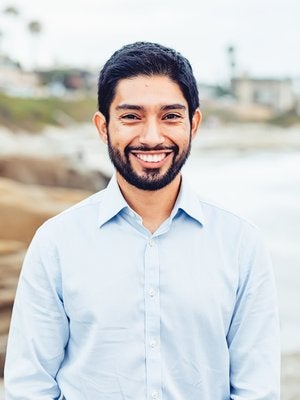 Sometimes the path towards a career – in this particular case, a profession that directly benefits the health trajectory of people suffering from a severe injury – can come from the unlikeliest of places. For UCR alumnus Arash Adami ’07, Ph.D. ’13, his founding of Alpha Fiber, a HealthTech startup, parallels his own intense interest in athletics as a rock climber, triathlete, and soccer player.

“I have been playing soccer forever (genetically inherited by my Hispanic and Middle Eastern parents) and never plan to stop,” Arash says. “I’m half Salvadoran and half Persian so when I joined the Iranian Student Association at UCR, their soccer team would play intramurals. I think the first game, I scored three goals! And that’s really been the story of my life, from college to graduate school to moving to LA, Baltimore, now in San Diego. It’s me showing up to a soccer pickup game and then making friends as I go.”

Alpha Fiber, which Arash, who is currently CEO, co-founded in 2019 with Joseph Villapando and Derek Rollend, provides the only real-time solution for detecting potential concussions in athletes (and military personnel) through the exclusive use of cameras – without the use of any “wearables” on the individual. Arash, who worked as a regulatory affairs consultant for five years and participated in six meetings of the Food and Drug Administration where he defended biologics and devices, is an acknowledged expert in neuroscience with particular expertise in traumatic brain injury and MRI physics. He also served academic stints as an adjunct professor in the biology department at Miramar College in San Diego, the University of Maryland Baltimore County, and California State University, Fullerton.

The startup’s vision is to “understand better how the brain functions in normal and pathological conditions and to be the leader in brain injury detection and treatment.” The company’s mission is to utilize cutting-edge technology to proactively detect potential concussions in real time. As Arash says, “The best way to solve a problem is to first understand it.”

Alpha Fiber’s patent-pending system utilizes computer vision, artificial intelligence, and machine learning technologies to track all head impacts and identify which ones can potentially cause injury. The Alpha Fiber team has decades of combined experience in researching traumatic brain injury, diagnosing and treating concussions, and developing specialized software powered by the latest technologies.

In a roundabout way, Arash’s interest in sports – especially soccer – pointed the way to enrolling at UCR as an undergraduate. “When I was in high school, one of my cousins went to UCR,” he says. “At that time there were brand new dorms on campus and he was one of the first people that went into Pentland Hills. I was a senior at Upland High School at the time and my dad really encouraged me to take college classes when I was in high school, so I drove over to UCR to take chemistry courses my entire senior year.”

It was at that time, while Arash was “moonlighting” at UCR (a 30-mile trek both ways, he says) that he really fell in love with the campus. “I was on the varsity team for soccer and after the season was over, I would go to UCR and hang out on campus.

“I knew there were some campuses that were very small,” Arash adds. “My high school was large, about 4,000 students. I had visited bigger campuses like UCLA and USC and they felt way too big. When I was taking classes at UCR during my senior year of high school, I started playing soccer with people I knew and the campus began to feel like home.”

One of the things Arash cherishes most about his time at UCR were the advantages of being at a large university while enjoying the small college feel of the neuroscience program as a CNAS undergraduate and graduate student. “You got the academic resources of a huge institution,” he says, “where I could go to the library and if I needed to see an article that UCR didn’t have, I could get a scan from, say, UC Berkeley, that would come to me in one or two days. At the same time, it was a small enough campus that every time you walked the grounds, you saw someone you knew – it felt like a community; just amazing.”

Arash’s fascination with neuroscience was stoked by the 1990s HBO television series Autopsy, which he would watch with his parents. “I used to love the show and was fascinated with how they would saw into the skull to dissect the brain,” he remembers. At UCR, Arash took “Systems Neuroscience” with Margarita Curras-Collazo, Professor of Neuroscience, and it was life-changing. “Everything before then was on a molecular/cellular level,” he says. “It was hard for me to conceptualize, but once we got to the pathways and understanding the systems, how things travel from the eye back to the brain or the motor system, how the neurons communicate with each other, I was insanely fascinated! I went to her office and asked if she needed volunteers for her lab.” Professor Curras-Collazo, Michael Adams, Distinguished Professor of Entomology and Neuroscience at UCR, and Andre Obenaus, Professor of Pediatrics at the University of California, Irvine (who was Arash’s Principal Investigator at the time) continue to be invaluable mentors to this day.

This past spring, Arash was named to the 40 under 40 list of achievers from UCR. As a student, he was involved with various campus activities and studied abroad in Spain his senior year. He is currently working with the college’s Student Recreation Center (SRC) to collect data on concussions in athletes. As a graduate student at UCR, Arash served on a committee to help design the SRC.

“I enjoy teaching and try to give back to my community by mentoring high school and college students,” Arash says. Indeed, the startup itself is dedicated to developing concussion education materials for organizations and teams around the world to help those in need that are affected by head injury.

Incidentally, Arash says, his commitment to mentoring began as an undergrad at UCR when, as a part of a Latino science group, he would conduct science experiments for local children. “We had access to liquid nitrogen and we would make ice cream for elementary school kids,” said Arash. “It was fun and we were helping each other in classes, mentoring, so that togetherness was quite awesome.”

In an interview for the website JobTalk, Arash said that he started his company when he was 33 and, at the time, had no idea where his path would lead him. “If you don’t know what you want to do with your life, even in your early 30s, enjoy it, don’t rush it,” he says. “You’ll find something you love eventually.”

For Arash, that journey of discovery has culminated in Alpha Fiber, a term that refers to the largest and fastest connection between two brain cells. The name also underscores Arash’s entrepreneurial purpose and passion – using technology to make crucial, fast connections for people in dire need.