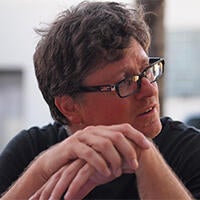 Dr. Vidussi joined UCR in 2005 and has held many leadership positions during his time at UC Riverside. Most recently, Dr. Vidussi was Chair of the UC Riverside Academic Senate's Committee on Educational Policy and Chair of the Undergraduate Committee for the Mathematics Department. He also served on the Campuswide Instructional Continuity Group and the Senate Workgroup on COVID-19 Instructional Contingencies.

Prior to joining UC Riverside, Dr. Vidussi started a tenure-track position at the Department of Mathematics at Kansas State University in 2002.

Early in Dr. Vidussi academic career, he studied in Trieste, Italy earning his undergraduate degree in physics from the University of Trieste and his  Ph.D. in Mathematics from the Scuola Internazionale Superiore di Studi Avanzati (SISSA). He held postdoctoral positions at the Ecole Polytechnique in Paris, France and at University of California, Irvine.

Dr. Vidussi’s area of research centers in 3- and 4-dimensional topology, and more specifically on the use of tools that span from physics-inspired gauge-theoretical techniques to group theory, in the study of topological properties of low-dimensional manifolds. Dr. Vidussi’s research has been supported by the National Science Foundation and by the Simons Foundation. Some of his most relevant publications have appeared in the Annals of Mathematics, the Journal of the American Mathematical Society, Crelle, and the Journal of the European Mathematical Society.