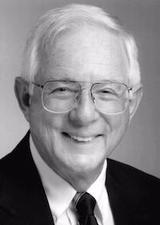 Born in Winters, California, Prof. Sims was the first of four sons born to Joe and Eve Sims. He graduated from Tempe Union High School, earned his B.S in Chemistry from Arizona State University in 1959, and received his Ph.D. in Chemistry from UCLA in 1964. Prof. Sims was hired as a Lecturer in the Department of Chemistry at UCR in 1964, transitioned to Chemist and Lecturer in the Department of Plant Pathology (now Microbiology and Plant Pathology) in 1965, and received the title of Assistant Professor in 1968. He was promoted to Associate Professor with tenure in 1969 and became a Full Professor in 1975.

Professor Sim’s research program was broadly focused on the identification and mechanism of action of chemicals that influence the ability of microorganisms to cause plant disease. He was, in essence, a natural product chemist who published a series of papers on the unique organic compounds found in marine plants. He joined the department at a time when it was believed chemistry was a key to developing new approaches to plant pathology and the control of plant diseases. To this end, he collaborated with faculty investigating the underlying biochemical processes that underlie disease resistance. Most notable was his collaboration with Professor Noel Keen in elucidating the chemical characteristics of phytoalexins produced as part of the defense mechanisms of host plants invaded by fungal and bacterial plant pathogens.

He published more than 125 peer-reviewed research articles, book chapters, proceedings and review articles during his career and was a primary author on two issued patents for use of methyl iodide as a fumigant.

Professor Sims also served in various administrative positions at UCR, including Faculty Athletic Director, Parliamentarian of the Academic Senate, and Chair of the Department of Plant Pathology from 1992-96. He was a member of the American Chemical Society, The Royal Society of Chemistry, Gamma Sigma Delta and the American Phytopathological Society.  He was a Visiting Research Fellow at Australian National University from 1970-71.

Professor Sims was a quiet, unassuming person with a kind and generous soul. He was always available to listen to people and give sound advice. He was not one to take sides and was a strong and stabilizing force in promoting harmony and positive thinking. He was a brilliant, caring man and his casual manner and wit will be missed.

He retired in 2004, and enjoyed many years of riding horses, playing tennis, and drinking wine with his wife, Judy, playing golf with his friends, monthly poker games, and watching baseball.

He is survived by Judy, his wife of 31 years; daughter Kelly; son Brian; brothers Chuck (Cathy) of Hemet, CA, Chris (Barbara) of Tempe, AZ, and Stan of Las Vegas, NV; grandchildren Mitchell and Charlotte, and several nieces and nephews.

A private scattering of ashes will be held at a later date in accordance with Jim's wishes. Friends and family are asked to raise a glass in Jim's memory.