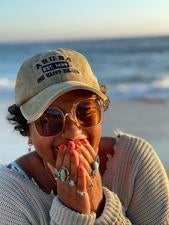 How did you become interested in your field of study?
I have been interested in infectious diseases for as long as I can remember. I would watch "Monsters Inside Me" on the Discovery Health Channel as a kid and take notes on what not to eat to avoid parasites and which parasites are endemic to different regions all over the world. I was always interested in science and medicine throughout my primary education and would take time reading medical encyclopedias just trying to learn about as many diseases as I could.

As an undergrad at UCR I was planning on going to medical school. But I volunteered at an emergency room and within the first two hours, I realized that working in a chaotic medical system wasn’t for me. Around that same time, I started research in the biomedical department at UCR through the MARC U STAR program. This incredible program allowed me to participate in high level research and receive financial support. At this time, I fell in love with the research process of coming up with new ideas and using all kinds of tools to test them out. I realized I am passionate about research, working with my hands, and learned that I have a special talent for micro techniques such as dissections and injections.

Why UCR?
UCR has a very special place in my heart. I have seen growth and progress over the past several years. UCR has the unique role of serving underserved communities in the Inland Empire where I grew up. I originally wanted to stay close to home and be at an institution that is down to earth and has a diverse student population. UCR is the best place I could have been for my entire post high school education. 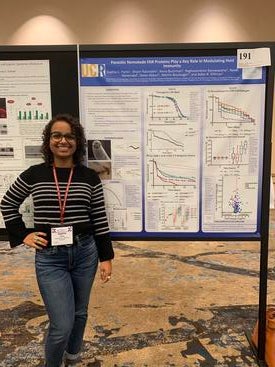 Please describe your research. Which lab are you working with?
I work in Dr. Adler Dillman’s lab in the Nematology department. My research is on the excreted/secreted proteins (ESPs) of parasitic nematodes. Parasitic nematodes release hundreds of ESPs into host tissues to increase their chances of successful infection and to evade host immunity. My initial project was on the fatty acid- and retinol- binding (FAR) protein family which are small, alpha-helix rich proteins. I found that FARs modulate host immunity leaving them more susceptible to bacterial infection. This was the first research to show that a nematode ESP directly alters the host's ability to elicit an immune response and alters the course of an infection.

Since FARs bind fatty acids, I became increasingly interested in lipid immune signaling in my model host organism, Drosophila melanogaster, the fruit fly. In humans, it is known that lipids cleaved from the membrane get converted by specific enzymes yielding downstream lipids that function in inflammatory or anti-inflammatory immune responses. In flies, that mechanism hasn’t been studied in detail. My current project is working on identifying lipids that are pro- or anti-immune and the mechanisms behind this signaling. On a day-to-day basis you’ll likely see me injecting thousands of flies with proteins and/or bacteria at the microscope for most of the day or running downstream immune assays.

Which faculty members do you work with? How has your faculty members been instrumental in your graduate work.
I have worked with many faculty members at UCR and there have been a few that have played a key role in my overall success. They include Drs Ernest Martinez, Sarjeet Gill, David Eastmond, Isgouhi Kaloshian, Naoki Yamanaka, and Adler Dillman. I want to highlight my PI Adler Dillman and our close collaborator Naoki Yamanaka. Dr. Yamanaka has been instrumental to my knowledge of the fruit fly as a model system and has continued to provide expert guidance to my research projects. In my opinion, Dr. Dillman is the best PI I could have ever asked for. He fosters such a welcoming and relaxed space for students to live up to their highest potential. He always has my best interest in mind and helped build up my confidence as a scientist while allowing me to be independent and to make significant contributions to the field. The support I received during my graduate career has been amazing and I am so thankful for all of the opportunities it has provided me with.

What are your plans for the future?
I am defending my dissertation on November 23 and will be starting as a postdoctoral scholar at Stanford University in the new year. I am honored to be a part of the inaugural cohort of the Propel fellowship which strives to train a distinguished group of scholars at Stanford to create inclusive, diverse, and equitable future professors. I will be conducting research in Dr. Manuel Amieva’s lab in the Pediatrics department. My research will focus on how Helicobacter pylori colonizes the gastric epithelium. I will also utilize human gastric organoids to investigate population specific virulence factors that enable H. pylori to persist in the gut and often lead to gastric ulcers and cancer.