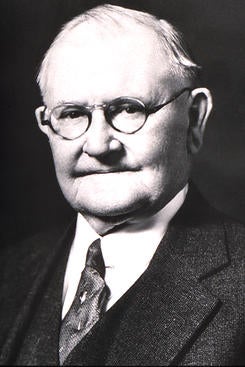 Herbert John Webber is remembered for many contributions to science, education, and agriculture, but his lasting influence on the city of Riverside and the University of California comes from his insistence that the fledgling Citrus Experiment Station remain in the city.

A professor of plant breeding from Cornell University before joining the Experiment Station as director in 1912, Webber was a "brilliant research scientist" whose research for the U.S. Department of Agriculture on citrus had made him well-known to California growers, wrote Harry Lawton and Lewis G. Weathers in chapter 5 of The Citrus Industry, Vol. 6.

"He was forceful, enthusiastic, and possessed of broad vision. Having grown up on a Nebraska farm, he understood the language and primary concerns of growers."

Webber also knew the advantage of keeping the Citrus Experiment Station in Riverside, where it had been established in 1907 as a branch of the Berkeley-based Agricultural Experiment Station and had built productive relationships with area growers. However, when the decision was made in 1913 to provide substantially more funding to the Station to expand facilities and staff, many legislators, businessmen, regents, and faculty used the opportunity to urge for the relocation to the San Fernando Valley, near growing and influential Los Angeles metropolitan center. At meeting after meeting for more than a year, Webber alone voted for the station to remain in Riverside, recommending a site for new buildings at the base of the Box Springs Mountains, a location that would develop in time into the UCR campus. Eventually Webber and a coalition of businessmen and politicians persuaded enough regents to accept their view. In voting for the Inland Empire city, the regents cited Webber’s preference and referred to the director as the "greatest living authority on citrus culture."

His status was confirmed as co-editor of the first two volumes of The Citrus Industry (the second volume was published two years after his death in 1946), which became known as the "bible of citrus growers." In spite of this background, Webber nevertheless echoed the views of his predecessors in believing that the Citrus Experiment Station had to address the needs of the entire region.

Webber attracted an outstanding staff of 18, including 11 of the top researchers in plant breeding, entomology, and plant pathology. Men such Howard B. Frost, Leon D. Batchelor, and H. J. Quayle would become the leading authorities in their fields, and their research was essential to the Station’s international reputation.

Webber’s other major contributions included heading the development of an extensive bioagricultural library, overseeing the inclusion of a former state biological control unit as a division of the Station, founding numerous state grower associations as well as the Los Angeles Farm Bureau, and developing the world’s first major center on avocado research. "When Webber retired in 1929," wrote Lawton and Weathers, "it was with the knowledge that he left behind the firm base of an enduring agricultural research institution."